A few weeks ago we received a glossy “Update” leaflet from Pemberstone about the development. I use the term “update” lightly here, as it mostly contained recycled PR from their previous statements and very little new information, let alone reassurances. 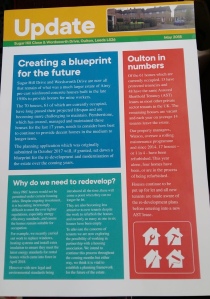 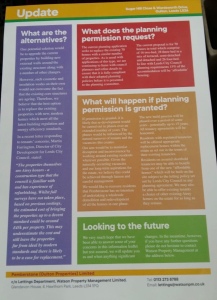 Still, it provides Pemberstone with brightly-coloured proof to the Council that they’re keeping the community informed, right? Erm, no. It only proves that their Communications Strategy hasn’t moved beyond “drop a leaflet through the letterbox and run before they see you”.

So, what did it say within these inappropriately cheery coloured boxes?

There’s Something About Airey

The general gist is that these Airey houses have reached the end of their life span and must be replaced by more modern homes that meet contemporary specifications. But none of these assertions are based on concrete evidence of the state of the properties. There have been no structural surveys of the occupied properties. If they have occurred in the vacant ones, Pemberstone has not shared the results, which suggests either no surveys have been done, or the buildings are structurally sound.

As we have highlighted previously, so many of Pemberstone’s assertions about the structural quality of our homes is based on general information about some Airey houses in the UK. There are also many Airey homes across the country that are structurally sound and happily occupied. Airey houses are listed under the Housing Act 1985, which was formulated mainly to legislate the provision of refurbishment grants and assistance for people who had bought them under Right to Buy prior to 1985 – it was never intended to be justification for demolition (information source: Prefab Museum).

The quotation Pemberstone gives from Martin Farrington, Director for City Development at Leeds City Council, inadvertently undermines their case as it admits that “full surveys [on the Oulton estate] have not taken place”. So how can Pemberstone or LCC know that these houses are not structurally sound? Either commission a survey or accept residents’ experiences of living in these homes for decades. These unsubstantiated assertions should stop until then.

[As a side note, in the interests of fairness given that the planning application is ongoing, it should be a concern for Leeds City Council that Pemberstone are misusing a quotation from Martin Farrington of LCC in support of their assertion of structural weakness when there is no evidence of such.]

It Ain’t Half Cold Mum

A second statement not backed up by sufficient evidence is that the property manager, Watson, have overseen a “programme of rolling maintenance”. This ambiguous statement cleverly offers no indication of frequency or activities. Elsewhere on the leaflet they state that Pemberstone “recently carried out work to replace windows, heating systems and install extra insulation”. But that certainly hasn’t been on all of the properties.

What they appear to be referring to in the examples they give are the improvements they make to vacant properties in order to let them out. Long term tenants, however, have experienced no such regular maintenance.

One long term resident noted that, since 1990, her house has only been painted twice. She asked for double glazing ten years ago, and finally received it this year after repeatedly chasing. As far as we are aware, no houses on the estate have all double glazed windows, and many are still waiting for heating system upgrades.

Another resident reported a broken boiler and no hot water to Pemberstone’s management company Watson on 29 January 2017 (a freezing month). It took two more days for them to send a plumber, only for the family to be told that the boiler was irreparable, must be taken away (causing no heating), and a new one can’t be brought for another couple of days. A week with no hot water or heating.

Elsewhere on this blog we shared the recent story of a burst pipe in the vacant No. 50. Water was gushing through the ceiling and the outside wall for several days and the emergency plumber had to break in to turn it off, as they couldn’t get the keys from a non-responsive Watson. Without repairing the property, the management agent then put a “To Let” sign up.

Thus the concerns Pemberstone expressed in the leaflet over meeting basic energy and maintenance standards ring a little hollow.

Energy Efficiency Ratings on a sample of the properties (on the EPC website) suggest only basic remedial work needs to be done to get them up to Energy Performance Standards. Why has this not been done on a rolling priority basis for all houses in the years Pemberstone have owned the properties? Only they can answer that. But in the meantime, Pemberstone must stop asserting that these houses are not fit for purpose.

No Country for Old Tenants

The third and final thing we will deconstruct (though there are many more points of contention) is their mustard-coloured reassurance text box: “What will happen if planning permission is granted?” The short answer to this question is: still no bleedin’ clue. Despite the header suggesting we might get some concrete answers, the only concrete we can be certain of is the walls of our houses. In fact, the box is littered with words like “potential”, “could be”, and “may be”. Hardly reassurance.

In the details of the box it falls back on the old chestnut of “natural turnover” and fails to take into account the significant proportion of tenants have been there long term. If the houses are to be demolished in phases over 15 years, does that mean those on protected tenancies will have to move around the estate several times before they get one of the “affordable” homes? This is not feasible for retirees in their 60s, 70s and 80s. What about those not on protected or regulated tenancies, who make up the majority of tenants? The leaflet seems to be avoiding the word “eviction” but that’s exactly what will happen to dozens of families who don’t fall under tenant protections and who stand in the way of Pemberstone’s bulldozer, no matter how “phased” the demolition might be.

The point we have repeatedly made is that families on this estate have nowhere else to go – there are no council houses in Leeds and market rentals near our schools and jobs are now unaffordable on a minimum wage or pension.

And as for those in protected tenancies, their assurances and numbers don’t add up. While they state in this leaflet that the 13 households on regulated tenancies will get the “affordable houses” on the estate, they are only offering to build 11 of them. Are they proposing a house share for some of the families? And there are two levels of tenant protection that families in those 13 households share, will both levels get guaranteed rehousing in the estate? But then there’s actually no certainty that the “affordable” homes within the new development will be rented out – legislation only speaks of affordability in sales terms and Pemberstone (or whoever owns them hence) might choose not to let.

So, all in all, this “update” wasn’t worth the glossy paper it was printed on. Residents will continue to worry about the security of their future within the homes and in the community, and Pemberstone will continue as planned. 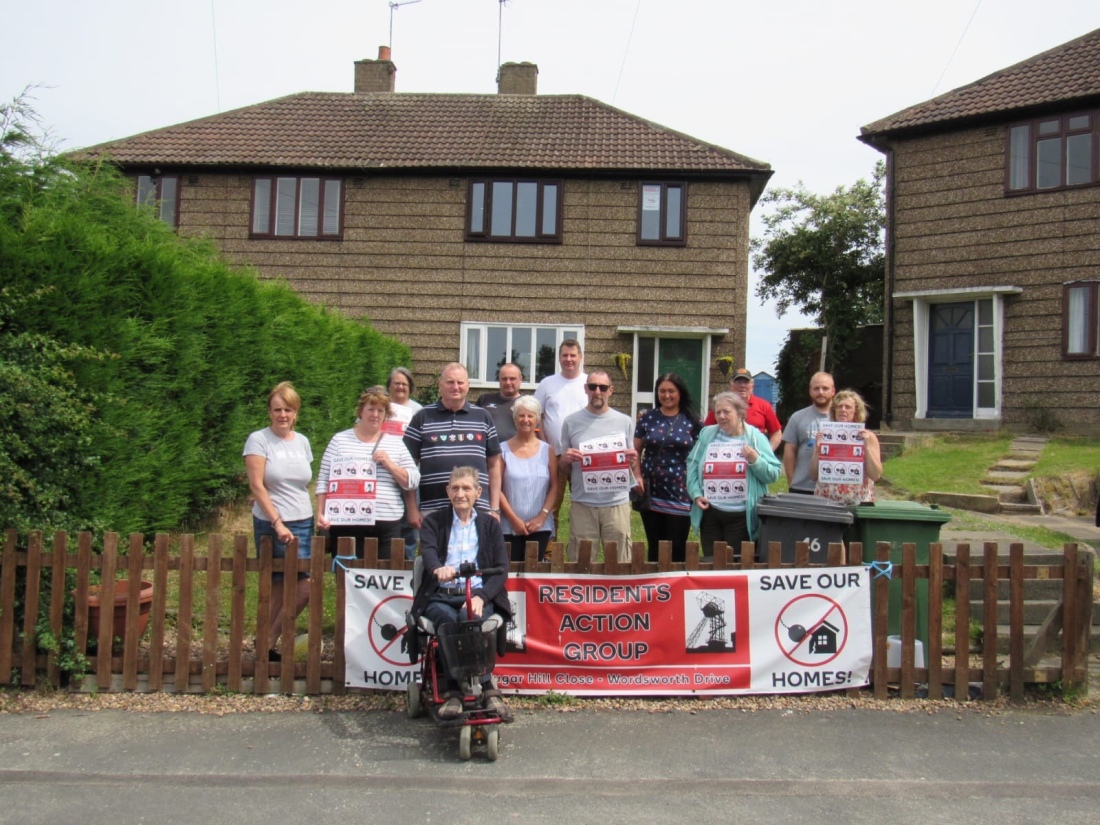 View all posts by jlarkspur

One thought on “Glossy obfuscation from Pemberstone”